Pawawit "Pat" Klinpratoom, 31, who once considered suicide after losing almost all his money in his failed food business in the wake of the 2007-08 Lehman Brothers crisis, has reinvented himself as a professional investor.
And he is a walking success story, with his investments in the Stock Exchange of Thailand having grown to many millions of baht in only a few years.
Mr Pawawit has also written five books on investment, some of them bestsellers, along with articles for his own website, www.pawawit.com, which received Thailand Blog Awards in 2010 and 2011.
The website is quite popular, having more than 30,000 fan pages and with more than 300 articles written mostly by himself.
Mr Pawawit introduces himself as a grandson of Veera Ramayarup, a co-founder and director of Bangkok Bank (BBL) who passed away a few years ago, and former labour minister Sora-at Klinprathum.
In fact, he has been employed by BBL since 2008, in the office of the president. His present position is investment adviser at Bualuang Securities, a subsidiary. 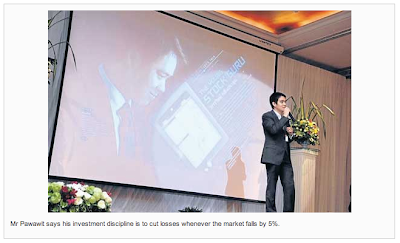 After graduating from Thammasat University in 2003, he travelled to Australia to study for his MBA but immediately found himself opening a Thai restaurant. In April of that year, he established Sawtell Thai Pty Ltd to operate the first Sawtell Thai takeaway and restaurant, later adding five five more outlets in Coffs Harbour, Moonee Beach, Umina Beach and Wyoming. Finally, he created a noodle box concept he called "Fit Food in a Box".
"My restaurant business at the time was so good that I bought a Mercedes-Benz sports car to reward myself. I enjoyed my business. It was full of fun and challenging. Rarely did I attend classes," he said.
Then the Lehman Brothers crisis struck, hitting businesses the world over.
"The crisis hurt me. I lost almost all the money I'd put into the business and had to shut down four branches. The only branch left had to be taken over by my partner, as I was broke. I had to come home in 2007 with empty pockets," said Mr Pawawit.
He never finished his master's degree, which was why he had gone to Australia in the first place.
"I became very depressed from the business failure and had no confidence in starting something new. Suicidal thoughts flashed through my mind, but finally I resolved to stand again on my own two feet. I spent a lot of time healing myself," he added.
"Grandfather Veera gave me a lot of support. He even put in a recommendation for me as a trainee in the office of the BBL president in late 2007."
His work there taught him that there is no such thing as an overnight success. He began thinking carefully before doing anything, started considering the right solutions to a problem and looked forward to jumping into business once again.
And Mr Pawawit still had connections in Australia. In 2008, he started a new venture with partners Steve Wilson and Brett Busty _ a glass laminating factory in the Guildford area of Sydney.
"At that time, I also became interested in investing in stocks. In 2009, I started writing stock investment guidelines on my blog and set up www.stock2morrow.com," he said.
"I've become confident in guiding others in stocks, having learned key strategies. My initial investment of 3 million baht has grown to many millions. The experience from my food business and glass factory taught me valuable lessons about business cycles, which are crucial to understand when investing," said Mr Pawawit.
"I have two strategies for stocks _ long-term investment representing 70% of portfolio value and short-term investment for the other 30%".
For long-term investment, he focuses on high-growth and dividend stocks that offer returns of 5-10% per year, while for short-term trading he selects only potential stocks with capital gains.
"Such is my investment discipline that I simply cut my losses whenever the market falls by 5%," said Mr Pawawit.
He has three questions for an investor to answer before buying any stock:
1) How popular is this company's product?
2) How necessary is it?
3) To what degree does the company practise good corporate governance?
He said it is very important to know what kind of stock you are buying. For example, if you want to buy stock in Advance Info Service (ADVANC), then you should know that the company is Thailand's No.1 mobile operator with 30-40 million subscribers. It is difficult for its peers to compete with it.
"But the best stocks are always expensive, so you should buy them when the shares are falling such as during the recent crisis. And you should learn the 'greed and fear' theory _ people fear to buy shares during a crisis even though it is really is a good time to snap them up at bargain prices," he said.
Mr Pawawit would like to see more of the younger generation think about social responsibility. Students learn all about capitalism, whose winner-take-all essence is very popular.
"But I disagree with this concept, as it's unfair to retail businesses and consumers. If possible, I'd like to open my own university to teach a new business theory based on a win-win concept," said Mr Pawawit.
"I know failure, and I know how it feels to stand back up again thanks to the four Buddhist iddhipada (bases of power) _ chanda (will), virya (energy), citta (consciousness) and vimamsa (discrimination)."
แปลสรุปหน่อย ก็ตามที่เขียนในหนังสือ "ล้มแล้วเจอตัวเอง" ...ธรรมะ สอนให้เรา "มีสติ" ..ทุกวิกฤตมีโอกาสเสมอ ...สิ่งที่ยึดมั่นในความสำเร็จของผมคือ "อิทธิบาท 4 " ฉัททะ/วิริยะ/จิตตะ/วิมังสา -- รักในสิ่งที่ทำ และทำอย่างมี Passion ด้วยความอดทน ...และค้นหา ความเก่งที่สุดในสิ่งที่ทำ ...มันสำเร็จอยู่แล้วล่ะ ไม่ว่าจะทำอะไร
...ทุกวันนี้ผม Happy มากขึ้น เพราะ ได้ทำในสิ่งที่ชอบ ได้สอน ได้เปลี่ยนชีวิตคน ...สนุกดี มันมี Passion และ ส่งต่อสิ่งนั้นได้ ... ไม่ได้ทำฟรี มันมีรายได้ และ ได้รับการยอมรับ ...ผมว่า นั่นแหละ ชีิวิตที่ดีขึ้นของผม ...ก็เอาใจช่วย ทุกคนที่มุ่งหา Passion ของตัวเอง ให้ได้
"โชคดีครับ"
ภาววิทย์ กลิ่นประทุม
เขียนโดย pawawit ที่ วันจันทร์, สิงหาคม 27, 2555 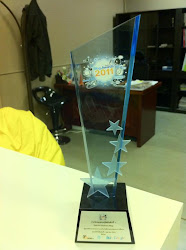